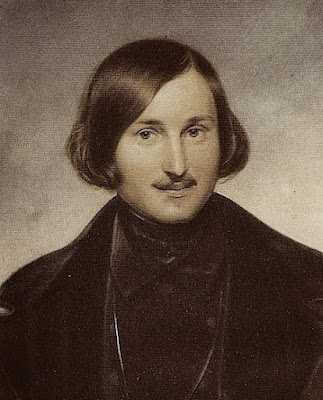 Nikolai Gogol, one of the most creative authors in all of literature, was born in Velykie Sorochyntsi, Mirgorodsky District of the Russian Empire to a family of landowning gentry. Named after Saint Nicholas The Wonderworker, Nikolai was baptized in the Church of the Transfiguration and spent his boyhood on an ancestral estate, in the colorful and folklore rich Cossack Malorussian countryside.

Gogol grew up an imaginative and artistic child, helping stage plays in his uncle’s home theater, much like his father Vasiliy Gogol-Yanovskiy, an enthusiastic amateur dramaturge, actor and conductor.

At the age of twelve, Nikolai was sent-off to Nezhyn School, a boarding school for boys. The usually secretive and shy “Mysterious Karla”, as he was called by peers, became know for his sharp tongue and brilliant mimicry, proving himself an exceptionally gifted comedic actor. Gogol’s smashing performances, especially his portrayal of aged characters, had the audience “spinning in the aisles”.

In addition to theatrical talents, Nikolai excelled at drawing, acted as stage designer, and contributed prose and poetry to the school magazine. Unlike most boys, Nikolai sensed an unusual destiny awaited him, often referencing signs, in which he firmly believed.

Upon concluding his studies in 1828, Gogol set out for a new life in the capital city of Saint Petersburg. Full of noble ideas, he aimed for a post in government.

Fate, however, had other plans for the young man. Following a time of hardship, inability to secure a proper position, and finally ending up as a clerk in various departmental offices, Gogol became completely disillusioned with a career in civil service. Yet, the experience served as a treasure trove of material and inspiration for his legendary literary works to follow.

Nikolai now knew his most noble calling was to write. Sensing a growing interest in all things Malorussian, its folklore and country life, Gogol penned and published his first volume of short stories “Evenings on a Farm Near Dikanka” in 1831.

The vivid fiction was instantaneously a success with readers and the avant-garde literary circle alike. During this time, Gogol was exceptionally prolific, writing with much spirit and zeal. “Evenings on a Farm Near Dikanka” was shortly succeeded by a second installment, entitled “Mirgorod”, and a collection of stories “Arabesques”.

Nikolai introduced himself to the literary elite and became a close acquaintance of his idol, the all-time celebrated poet Alexander Pushkin, and Vasiliy Zhukovsky, a poet and foremost leading figure in Russian literature.

In 1836 his satirical comedy “The Government Inspector” (The Inspector General / Revizor) had its premiere on Saint Petersburg and Moscow stages.

That same year, Gogol commenced his European travels, visiting Germany, Switzerland, France, and eventually settling in Italy, where during the next 12 years he took up residence in his beloved Rome.

While in Italy, Nikolai befriended a close neighbor and one of the greatest Russian fine artists, Alexander Ivanov, spending much time in his art studio. A great admirer of visual art, he became a permanent fixture in artist circles.

In the splendor of the Eternal City, Gogol completed “Dead Souls”, wrote “Rome”, “The Overcoat”, the play “Marriage” and others.

His short story “The Portrait” had its first publication in “Arabesques”. Initially written between 1833-1834, Gogol considerably revised his tale between 1841-42 while in Rome, and republished “The Portrait”, in its new form, in The Contemporary Magazine.

A painter with words, Nikolai Gogol established himself as the greatest satirist and mystic. Fearlessly and truthfully analyzing life and its characters in the most unconventional ways, he created bold caricature personalities, supernatural metamorphoses, and unexpected worlds in his deeply original Gogolesque style.